Departments / Orthopaedic Surgery / About Us / Mission/History 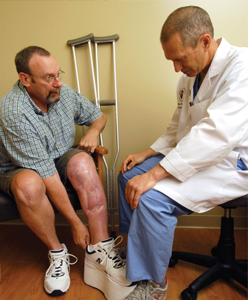 The UC Department of Orthopaedics is leading the way when it comes to orthopaedic research, medical education and quality clinical care in the Cincinnati and Northern Kentucky region.

Orthopaedic surgery at the University of Cincinnati (UC) College of Medicine officially began in 1902, when Albert H. Freiberg, MD, was named professor and head of the discipline. An 1890 graduate of the UC medical school, he was the first orthopaedic surgeon west of the Alleghenies.

Upon Dr. Freiberg's retirement in 1938, his son, Joseph A. Freiberg, MD, was named head of the Orthopaedic Division of the Department of Surgery and served until 1969, when he was given the honorary title of Professor Emeritus. Edward H. Miller, MD, was appointed director of the combined divisions of Fractures and Orthopaedics in 1969.

In 1975, Dr. Miller became acting director of the newly established Department of Orthopaedics and a year later was appointed Director and Professor. Dr. Miller was given the honorary title of Professor Emeritus in 2000.

In November 1975, the Department of Orthopaedic Surgery established the Christian R. Holmes Orthopaedic Outpatient Center at the Holmes Division of University Hospital. In October 1978, the department centralized outpatient care of orthopaedic patients at the medical center by relocating to the Medical Center Clinic Building. This move was in keeping with our concept of the structure of a true university medical center, and it facilitates the provision of the same high standard of health care to all patients.

In 1982, Clark N. Hopson, MD, became director. In March of 1989, the private practice of orthopaedic surgery relocated to the new University Medical Arts Building (now UC Health Physicians Office­–Clifton). This modern facility utilizes state-of-the-art equipment and houses most of the subspecialties of medicine at University of Cincinnati Medical Center.