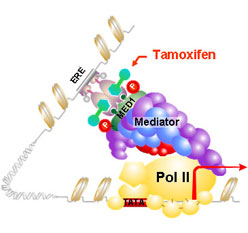 Our research focuses on elucidating the molecular mechanism of gene transcriptional regulation and its desregulation in breast cancer, with an ultimate goal to provide novel insights and potential therapeutic targets for better diagnosis, prognosis and individualized treatment of the disease.

Breast cancer is the most common type of cancer and one of the leading causes of death among western women. A vast majority (75%) of breast cancer was found to express estrogen receptor (ER)a, which is the key mediator of estrogen functions and plays prominent roles in breast tumorigenesis and drug resistance.

Anti-estrogens such as tamoxifen have been widely used in their treatment but acquired resistance greatly limited their usages. Hence, further development of novel strategies to selectively block estrogen signaling pathways is urgently needed.

Building upon these promising results, we have centered our studies on the role and underlying molecular mechanism of MED1 in regulating estrogen receptor functions in breast cancer, and to devise innovative therapeutic approaches to target MED1 for their treatments.

i. Tissue-Specific In vivo role of MED1 in Mammary Stem Cell Determination and Tumorigenesis 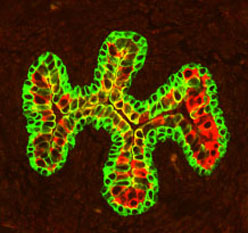 ERa directly interacts with MED1, in a ligand-dependent fashion, through two classical LxxLL motifs to recruit MED1 and its associated proteins to activate the expression its target genes.  We have recently generated MED1 LxxLL motif-mutant knockin mice, and surprisingly, found that these mice are both viable and fertile, and do not exhibit any apparent gross abnormalities.  However, they do exhibit severe defects in pubertal mammary gland development.  Interestingly, this impaired response to estrogen is limited to mammary gland but not other estrogen-responsive tissues such as uterus and bone.  Finally, along with our further findings that MED1 is differentially expressed in different types of mammary epithelial cells (as contrast to current assumption that Mediator subunits are universally expressed), our studies indicated that MED1 LxxLL motifs play a role in mammary luminal epithelial cell differentiation and stem/progenitor cell determination.  Recently, we have further crossed this MED1 mutant knockin mice with mouse mammary tumor prone mouse models and confirmed its key roles in tumor progression and cancer stem cell formation in vivo. 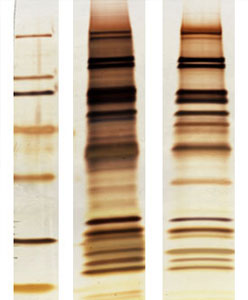 As mentioned above, MED1 is the key Mediator subunit that directly interacts with estrogen receptor to mediate its functions both in vitro and in vivo.  Interestingly, our biochemical analyses indicated that MED1 exists only in a subpopulation of Mediator complex that is enriched with a number of distinct Mediator subunits and RNA polymerase II.

Recently, we have characterized one of such protein named ARGLU1 (arginine and glutamate rich 1) and found ARGLU1 not only colocalizes with MED1 in the nucleus, but also directly interacts with a previously uncharacterized far C-terminal region of MED1.  Futher reporter assays, ChIP and ChIP-reChIP assays established a role for ARGLU1 in cooperating with MED1 to regulate estrogen receptor-mediated gene transcription.

Importantly, we found that depeltion of ARGLU1 significantly impairs the estrogen-dependent growth, as well as anchorage-dependent and -independent colony formation of breast cancer cells.

Our future work will continue to unveil the molecular mechanism of ARGLU1 functions and start to further characterize other MED1-Mediator complex associated proteins.

To further study the role of MED1 in human breast cancer, we examined MED1 protein expression by using human breast cancer tissue microarrays.  Consistent with previously reports that MED1 coamplifies with HER2, we found MED1 protein expression level is correlated most strongly with HER2 status.  Our further study supports HER2 as a major upstream regulator responsible for MED1 phosphorylation at sites known to be critical for MED1 activation.

Interestingly, we found a phosphor-MED1 dependent coactivator/corepressor switch on endogenous ER target genes’ promoter by tamoxifen in HER2-overexpressing cells.  Importantly, knockdown of MED1 significantly sensitized the otherwise resistant HER2 overexpressing cells to the tamoxifen treatment.  Taken together, these results support MED1 as a key convergence point between ER and HER2 signaling pathways in mediating endocrine resistance.

This is significant because it has been recognized that activation of the tyrosine kinase HER2 is one of the major mechanisms contributing to endocrine resistance.

Our results therefore support targeting MED1 could be a useful strategy in fighting against endocrine resistance because we could simultaneously block both HER2 and ER pathways to overcome the resistance of tumors. 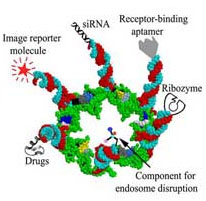 Our above studies revealed new roles of MED1 in mediating ER functions in both mammary stem/progenitor cell determination and tamoxifen resistance of breast cancer.

Importantly, our published data described above also revealed a previously unexpected tissue- and gene-specific role for MED1 in vivo, and showed that disruption of MED1 resulted in an impaired estrogen response in breast but not in uterus and bone.

Thus, targeting MED1 could result in selective inhibition of estrogen signaling pathways in breast, and could overcome the severe adverse effects of currently used medicines on other estrogen-responsive tissues.

To achieve that, we are currently employing RNA-based nanotechnology to disrupt MED1/ER interaction or the protein expression of MED1 itself for the treatment of breast cancer.  There are a number of advantages of using RNA-based nanotechnology in breast cancer therapy, including its nanoscale size, high stability, control synthesis, multi-conjugation capability etc.

Importantly, RNA is known to elicit little or no immune response, and therefore represent a promising new avenue for cancer therapy.