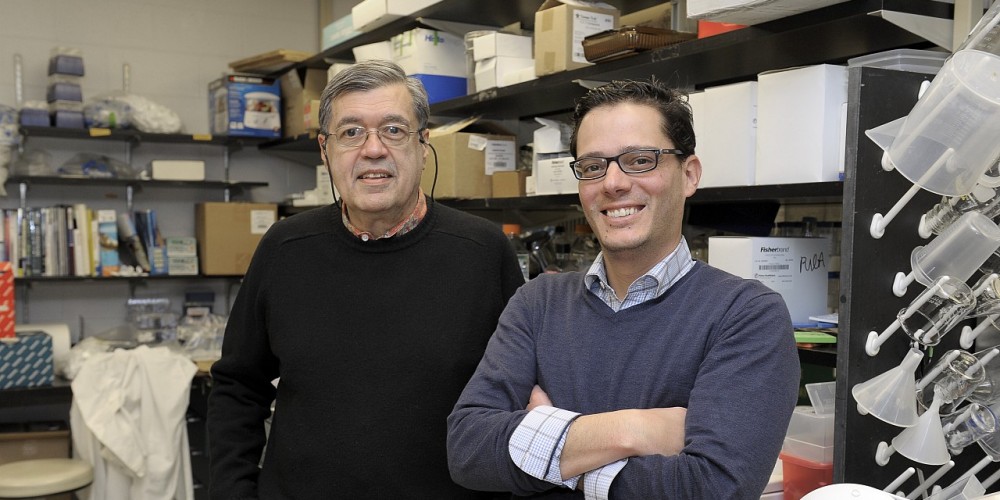 With $2.4M Grant, Researchers to Collaborate in Study of Heart Disease

After receiving a five-year, $2.4 million grant from the National Institute of Environmental Health Sciences (NIEHS), two University of Cincinnati researchers will collaborate on an investigation of gene-environment interactions during embryonic development and their consequences in adult heart disease.

Alvaro Puga, PhD, of the Department of Environmental Health, and Jack Rubinstein, MD, of the Department of Internal Medicine, Division of Cardiovascular Health and Disease, received the grant from the NIEHS, an institute of the National Institutes of Health (NIH). They will serve as co-principal investigators.

Dioxins are highly toxic compounds that are byproducts of industrial processes and are present in the environment. They are ingested into the body orally, Puga says (through eating the meat of cows that have grazed on dioxin-contaminated fields, for example), and stored in fat. Dioxin can be mobilized during pregnancy when fat stores are needed, he says.

Rubinstein says researchers will use a sophisticated high-frequency ultrasound imaging machine to study mice that have been exposed to dioxin, beginning in the womb.

“We can actually measure the heart function and see the structure of the heart before the litters are born,” he says. “So we’ll be able to follow the litters from before birth all the way out after birth and into adulthood.”

Adds Puga: “Congenital cardiovascular malformations are the leading cause of neonatal and infant death and a major cause of adult cardiac insufficiency, and there’s a critical need to understand the mechanisms that causes these diseases.

“This study will establish the role of AHR in cardiac development and help identify gene-environment interactions that may aggravate heart disease susceptibility.”

The collaboration between Rubinstein and Puga was initiated by Vinicius Carreira, a graduate student in the Puga lab and a doctor of veterinary medicine and animal pathologist, who was interested in this project for his doctoral thesis and contacted Rubinstein with the idea.

“His involvement in the project illustrates how critically important the role our graduate students play is in the research done in the College of Medicine,” Puga says.