Work performed in BUCL is an integrated part of the ultrasound research program at the University of Cincinnati.  The team of ultrasound researchers has formed Image-guided Ultrasound Therapeutics Laboratories (IgUTL).  IgUTL is directed by Christy K. Holland, Ph.D. and includes her lab, BUCL, and the Biomedical Acoustics Laboratory. The main research foci in BUCL include Acoustic Droplet Vaporization and Passive Cavitation Imaging. 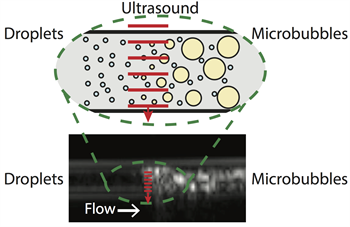 Figure 1: The top portion of the figure is a magnified schematic of the ADV process, shown on a B-mode image in the lower part of the figure.  Droplets are convected through a flow tube from left to right.  The droplets appear hypoechoic (dark) in the lumen. After ADV, the resulting microbubbles are hyperechoic (bright). The droplets (small blue circles) do not phase transition into microbubbles (yellow circles) until they are exposed to ultrasound.

Figure 2: Schematic of the mechanism of gas scavenging during ADV.  The left panel shows a perfluorocarbon droplet (blue circle) that has the same oxygen content inside the droplet as the fluid outside the droplet.  The middle panel shows that after the droplet is converted to a gas bubble, the number of oxygen molecules inside the bubble is the same as that of the originating droplet. However, the concentration inside the bubble is less because of the volumetric expansion of the perfluorocarbon.  The right panel shows that as a result of the differences in the gas concentrations and oxygen solubilities of the surrounding fluid and the perfluorocarbon, oxygen diffuses into the bubble from the surrounding fluid, reducing the concentration of oxygen in the surrounding fluid.

We have demonstrated the ability to scavenge dissolved oxygen from both saline and from porcine whole blood using an in vitro flow model (Figure 3). A numerical model based on the mechanisms concentration gradients has been developed and can be used to predict the expected decrease in dissolved oxygen (Radhakrishnan et al. 2016). This numerical model indicates that the key factor in scavenging oxygen is the total volume of perfluorocarbon that is converted from a liquid to a gas. 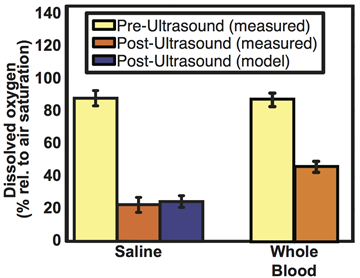 To translate the effect in vivo, we have developed a differential centrifugation protocol to size-isolate droplets that transition most efficiently, while also removing droplets that are too large to pass through the vasculature (Mercado et al. 2016). An alternative approach being investigated is the use of microfluidic droplet manufacturing (Figure 4). On going studies are investigating the ability to precisely control oxygen scavenging levels and measuring changes in myocardial reperfusion injury using ex vivo and in vivo models. 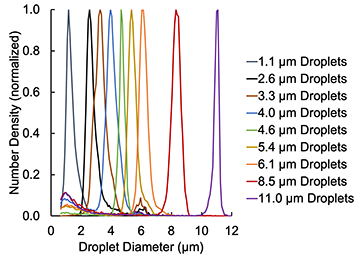 As we have demonstrated at UC and other laboratories around the world, cavitation is associated with a several bioeffects, including sonothrombolysis, HIFU thermal ablation, sonoporation, and drug and gene delivery. The microbubble activities that induce these bioeffects also produce characteristic cavitation emissions, which can be detected using single-element transducers. Single-element transducers provide good spatial sensitivity or specificity for the detection of cavitation emissions, but not both. Passive cavitation imaging is an array-based approach to processing cavitation emissions that have excellent spatial sensitivity and specificity. Array-based passive cavitation imaging can provide superior signal-to-noise as compared to single-element transducers by destructive interference of incoherent noise across the individual elements in an array. Through our experiments and analysis, we have demonstrated that the resolution of passive cavitation imaging is diffraction dependent (i.e., primarily depends on the frequency content of the signals being beamformed and the passive array element spacing and geometry). Therefore the image resolution does not depend on pulse shape or length, in contrast to standard B-mode imaging.

Figure 1: Passive cavitation images of subharmonic emissions overlaid on ultrasound B-mode images of echogenic liposomes flowing (left to right) through a vessel phantom.  Cavitation of the echogenic liposomes is induced with a clinical scanner in spectral Doppler mode (MI = 0.8).  Loss of echogenicity in the B-mode images occurs at the same spatial location as subharmonic emissions in the passive cavitation images. 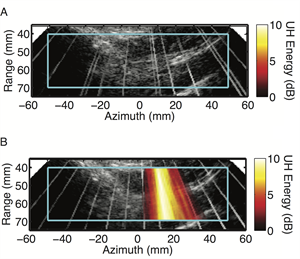