Jan 14, 2020, 15:43 PM by Maurice Dennis
On Tuesday, January 14, 2020, a group of nine ERC students and faculty had the opportunity to participate in an interdisciplinary field experience in occupational safety and health with Samuel Adams Brewery in Cincinnati, OH.

The field trip to Samuel Adams Brewery on Tuesday, January 14, 2020 was very educational. Thanks to our guide Mr. Deron Denton, the Environmental Health Safety and Security Manager, who has worked at the brewery for almost seven years.

The required attire was communicated to all members before the trip. Personal protective equipment (PPE) were supplied by the brewery in the form of a bump cap and safety glasses for each member. This is a safety requirement for everyone who enters the brewery. Jewelry, bracelets, watches, ear or face piercings, etc. where not allowed in the plant. This is a Hazard Analysis and Critical Control Points, or HACCP, which is a requirement by the Food and Drug Administration (FDA) to ensure food safety from biological, chemical, and physical hazards in production processes that can cause the finished product to be unsafe.

The brewery employs about 140 employees and in addition, they average 40 contractors and six temporary workers every day with more during their busy season from March to September.

Mr. Denton is very passionate about the safety of all employees and is striving to make it a culture at the brewery through proactive preventative collaborations with Tri Health. The brewery had just celebrated a monumental milestone of one full year without an OSHA recordable injury.

Mr. Denton, who is very knowledgeable about every section of the brewery, gave us insight into each section we visited. Some of the sections visited were the fermentation area, “ruh” cellar, and centrifuges.

The fermentation area is where the yeast is added to the mixture to make it ferment and produce alcohol and CO2. This process takes between five and ten days. The other cellar, the main hub, has tanks on four stories and this is where the beer from the fermentation area is channeled through centrifuges, which extract all the solids from the beer to make it a smooth liquid. From there the beer goes to the ruh cellar, which has 35 tanks on five floor levels. In the ruh cellar the beer has been fermented and left to cool to make it ready for bottling before it goes to the final consumers.

The beer movement is not done manually but managed through a computer system, which transfers beer from one section to the next.

This included the operational process of deliveries made to the brewery as well as trucks arriving to the brewery to pick up and transport materials offsite. One safety measure discussed during our tour was the protocol in place for how truck drivers were to alert onsite staff prior to entering the loading docks. This protocol is in place due to space limitations at the brewery that could make maneuvering trucks difficult for anyone unfamiliar with the site. Due to these concerns, the arriving driver contacts the brewery staff to arrange for someone onsite to meet them at the neighboring lot to complete the onsite portion of the delivery.

Another safety measure discussed was the process of using a lift to support the bed of any truck being loaded or unloaded at the brewery. A lift ensures that the truck does not tip or become unsteady in anyway during this process. The lift anchors to the bed of the truck to support imbalances that could cause the truck to tip in either direction, which would lead to unsafe conditions for the driver, the staff, and any pedestrians in the general area.

These are just a couple of examples of safety practices shared with us during the Samuel Adams Brewery Tour. It was interesting to learn that the protocols in place were not only practiced within the brewery’s interior but across all of the brewery’s property as well.

On January 14, 2020, I had the privilege of touring the Samuel Adam's Brewery in Cincinnati, OH with other health and safety graduate students. Our tour guide was Deron Denton, Safety Manager for the facility. He has an impressive record of decreasing workplace incidents from 12 the year before he started 5 years to ago to zero for the last year! He has recently come up with a new program where he will have staffed a part time ergonomist and trainer to help evaluate stations and develop an improved environment for the workers. The ergonomist and trainer will also be available to staff to help with any physical problems they might be have. This impresses me greatly because it shows the proactive mindset it takes to helm a safety program.

Deron spoke of the importance of maintaining the safety codes for the full-time staff as well as the contract staff; he understands the requirements for the different work areas (construction and business) as well as how the paperwork needs to be processed. There are many safety measures implemented; from OSHA safety standards to company implemented warning lights on forklifts that indicate the safe zone. There is annual safety training as well as specialty training. All of these things and so much more fit together to make a safety culture that is followed and respected by all.

Ammonia and CO2 are the main chemical exposures of concern in breweries.

According to the National Institute of Occupational Safety and Health’s (NIOSH) Pocket Guide to Chemical Hazards, anhydrous ammonia (NH3) is a colorless gas with a pungent and suffocating odor. NIOSH set a Recommended Exposure Limit (REL) at a time-weighted average (TWA) of 25 ppm while the U.S. Occupational Safety and Health Administration (OSHA) set a Permissible Exposure Limit (PEL) at 50 ppm while working an eight (8) hour shift. Ammonia is considered immediately dangerous to life or health (IDLH) at 300 ppm. The most common route of exposure when encountering ammonia is by inhalation. Symptoms caused when coming into contact with airborne ammonia can include irritation of the eyes, nose, and throat, wheezing, and chest pain.

Skin and eye contact should always be avoided, but multiple eyewash stations were seen throughout the facility in the event a chemical comes into contact with the eye. If any employee comes into contact with ammonia and suffers an adverse effect, such as respiratory troubles, the employee should seek medical attention immediately. According to Deron, the site’s EHS manager, if any of the monitors were to measure a concentration of 100+ ppm of ammonia, the facility would treat this event as if 100 ppm were the IDLH value instead of the actual 300 ppm concentration. This is designed to better protect the workers from being adversely effected by the ammonia.

According to the NIOSH Pocket Guide to Chemical Hazards, carbon dioxide (CO2) is a colorless and odorless gas which is most commonly exposed to workers through inhalation routes. NIOSH set a REL at a TWA of 5,000 ppm and OSHA set a PEL at 5,000 ppm while working an eight (8) hour shift as well. CO2 has an IDLH value set at 40,000 ppm. Symptoms of exposure to CO2 can include headache, dizziness, increase in blood pressure, and restlessness. During one point in the tour, our tour guide stated that the reason we felt slightly out of breath after walking up a couple flights of stairs was because the concentration of CO2 is typically around 8,000 ppm. The company is mindful of the NIOSH and OSHA standards for CO2 exposure and limits employee and visitor duration of exposure to well within the recommended exposure limits. This portion of the brewery is relatively uninhabited as most of the employees were operating the machinery from control booths.

The Samuel Adams Brewery, located in downtown Cincinnati is a fantastic combination of modern technology partnered with an ages-old tradition to brew the best American beer. According to the Samuel Adams website, the history begins in the early 1980’s when the founder, Jim Koch, found a recipe for Boston Lager in his father’s attic that belonged to his great-great-grandfather. He founded the Sam Adams Boston Brewery in 1984, and in 1997 he purchased the Hudepohl-Schoenling Brewery in Cincinnati, bringing Samuel Adams to his hometown. The tour of the Cincinnati brewery was very educational for this small-town Texas girl. The brewhouse itself consists of several steps, each just as important in the process as the next.

Malt mill: Once a beer has been designed, and the list of grains has been determined, the next thing is to set the mill based on the grain type and how malted or roasted it is.  Each grain may have a different gap setting, the space between the rollers, to process the grain optimally.  The purpose of the mill is to crack, rather than grind, the grain, so water and enzymes can work on extracting the starch from the kernel, and pull flavor from the kernel and the husk.

Brewery waste products are, for lack of a better term, used interestingly. What struck me was the use of grain/hops waste in animal feed, mainly pig feed. Other uses I discovered:

Overall, I really enjoyed myself, and I am now motivated to actually visit my brother-in-law’s brewery in Dallas with some knowledge at hand! 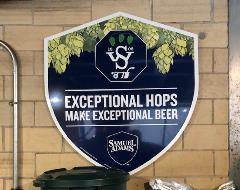 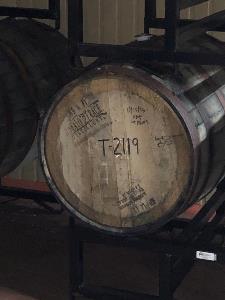 Buffalo Trace Bourbon Barrels - Used for aging a wide variety of beers, though usually dark amber and darker. Also, usually 7.5% ABV or higher. The handwritten notes indicate that the Sam Adams brewers added a variety of Kosmic Mother Funk  and plums in December of 2016, so these have been aged a long time, if still full.

This is a well know Sam Adams beer. The large T-number is for tracking the batch, which is linked to a database of batch-specific information on grain, hops, yeast, and additions(fruit, etc.).

When visiting Samuel Adams Brewery, it was clear there are many regulatory standards the site must adhere to keep workers, visitors, and the surrounding community safe. The site follows OSHA General Industry standards. However, if there is construction on site, they must follow OSHA Constructions standards. The standards followed are based on the type of work that is being completed. In addition, the site has employed workers, contract, and temporary workers. The oversight, training, and reporting of injuries may differ based on who is the foreman for the work. The oversight could be achieved by the host site or the contract company. Samuel Adams Brewery Safety Manager, Deron Denton, indicated that all contract and temporary workers are given in-depth hazard training that is specific to the site.

Samuel Adams is going above meeting the regulatory standards and has focused on a culture of safety. Employees are empowered to let each other know if there is an unsafe practice occurring and asked to be respectful when giving or receiving that feedback. In addition, employees are encouraged to report any near misses or issues that could lead to injuries. The safety and health manager spoke about being open to feedback and conscientiously having a non-punitive reaction when concerns are reported.