As part of the ERC interprofessional field trip experience to Michigan, the group toured the Ford Rouge Factory’s new facility near Detroit. The tour started with a video history of Ford Motor Company and the original Ford Factory site, one of the first factories to fabricate nearly all of its own materials on-site. Historical photo and video footage of the early 20th-century assembly line floor showed that while personal protective equipment was minimal in the historical footage, shields on the sides of safety glasses were at least partially in use. 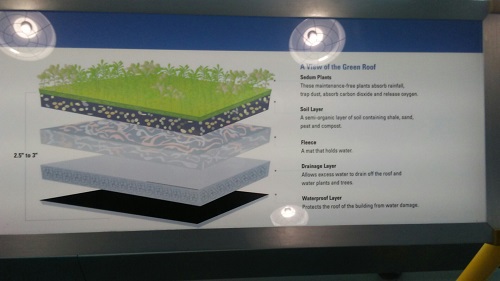 A key feature of the factory tour was the green roof system on the factory building. Sedum, a family of native flowering perennials, was planted on top of the building and provides several benefits. These include passive cooling of the building in summer (minimizing energy consumed for A/C), and buffering/filtering roof rainwater runoff. In addition, the major parking lot for the new plant utilized porous concrete, which allowed pooled rainwater to filter through the surface. Both features minimize the plant’s implant on local water ecology, as evidenced by the robust health of frog species in the campus’s water retention ponds. However, one trade-off is extensive colonization of the roof by birds and insects. In particular, migratory geese bring seasonal showers of excrement and their territorial behavior has been an issue for worker safety on the factory campus.

View of the Ford Green Roof

The factory assembly line floor featured extensive use of automation-enabled hand assembly of the vehicle cabins, which minimize many ergonomic hazards workers would otherwise be exposed to. In one station, a mechanical arm supported the center console piece and allowed the worker to guide it into the cab, avoiding the strain and awkward body posture required to move the part into the cab unassisted. In a nearby section, a swivel chair allowed workers to move into the cab and perform the task in a quicker and less taxing way than requiring them to crawl or climb inside. Most of these tasks took place on a large moving belt that both transported the cabs and provided the workers a platform on which to easily move around and work at a safe pace. Pneumatic lifts adjusted the cabins to heights appropriate for task-specific worker ergonomics. Hazards from falling overhead components seemed to be well-controlled by catwalks and Plexiglas shields. Overall, the facility appears to incorporate broad considerations of occupational and environmental stewardship and reflected investments in long-term regional sustainability. 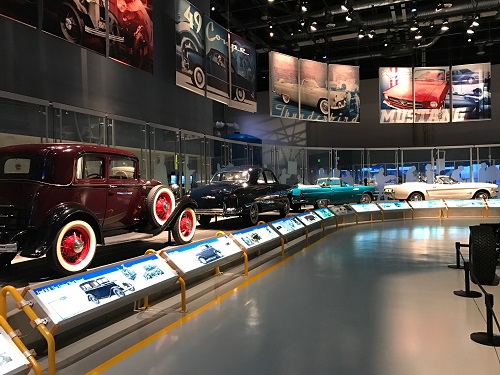 The end of the tour featured a showroom with classic Ford models to view close up and read about their production histories. 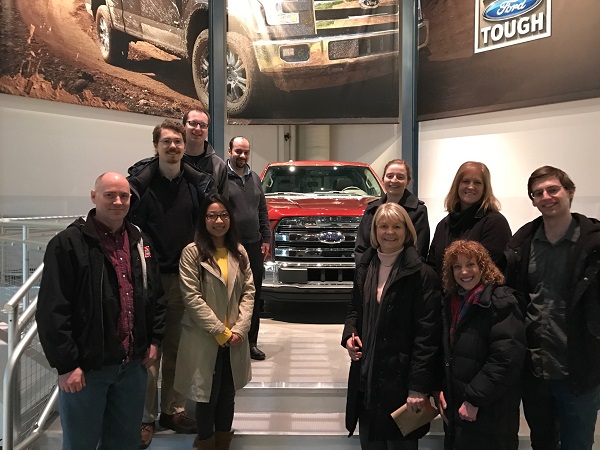 UC group at the end of the tour

Thank you to the University of Michigan ERC for hosting our Cincinnati group and for planning a great opportunity to network between the Michigan, Cincinnati, and Illinois ERCs. We look forward to further collaboration in the near future.
Intranet Login