Discovery of CST and its role in human disease CTC1 in a genetic screen and showed that its disruption results in rapid telomere loss and chromosome fusions. We depleted the human ortholog with siRNA and saw loss of telomere signals and split/multi-telomere signals by FISH and elongation of the telomeric 3’ overhang (Fig 1).

We also saw indications of general genomic instability (γH2AX staining and anaphase bridges) (Fig. 2), suggesting human CTC1 has both telomeric and non-telomeric roles. Dr Shippen then found that AtCTC1 interacts with plant orthologs of the S. cerevisiae Stn1 and Ten1 telomere proteins and Dr Fuyuki Ishikawa of Kyoto University independently identified mammalian CTC1 as a subunit of a trimeric complex consisting of CTC1, STN1 and TEN1 (CST) and showed partial localization of CST to telomeres.

Thus, CST appeared to be the human and plant ortholog of the Cdc13-Stn1-Ten1 complex that protects telomeres in S. cerevisiae (ScCST). However, mammalian telomeres are protected by the shelterin complex (Fig. 3) so the telomeric function of human CST was unclear. A subsequent publication revealed that the CTC1 and STN1 subunits had originally been identified in 1989 as a DNA polymerase α Accessory Factor (AAF) that stimulated pol α affinity for ssDNA templates. These earlier biochemical studies provided a foundation for our subsequent work in which we showed that CST functions in several aspects of telomere replication and in genome-wide replication rescue.

More recently, mutations in the CTC1 gene were identified in children with the terminal neurological disorder Coat’s plus. The patients suffer from cranial calcifications and abnormal blood vessels leading to GI and retinal bleeding. Some also display symptoms of the short telomere syndrome dyskeratosis congenita. The severity of symptoms in Coats plus patients is likely to reflect both the telomeric and genome-wide deficiencies in DNA replication caused by CTC1 mutation. In mammals, telomeres consist of kilobases of TTAGGG repeats that terminate in a 100-200 nt single-stranded 3’ overhang. The overhang invades the duplex region to produce a lariat like structure called a T-loop that protects the DNA terminus from degradation or fusion. The repetitive nature and unusual terminal structure of telomeric DNA makes telomeres difficult to replicate. Consequently, telomere replication requires additional steps and factors beyond those essential for general genomic DNA replication. The initial stage of telomere replication occurs in early to mid S-phase when helicases such as WRN and RTEL, the shelterin component TRF1 and subunits of the CST complex act in conjunction with the conventional replication machinery to ensure efficient replication of the duplex region (Fig. 4). Telomerase then extends the 3’ overhang soon after duplex replication is complete. Finally, the complementary C-strand is filled in several hours later during late S/G2 phase by polymerase α-primase (pol α) aided by CST. This step is termed C-strand fill-in. Roles in telomere relication. Several finding suggested that mammalian CST might be involved in telomere replication. First, as mentioned above, CTC1 and STN1 were originally identified as a DNA pol α stimulatory factor. Second, budding yeast CST functions in telomere replication in addition to its role in telomere protection. The Cdc13 and Stn1 subunits regulate extension of the G-strand by telomerase. They also interact with pol α and are thought to facilitate C-strand fill-in synthesis. When we depleted CST subunits in human cells we found evidence that human CST is also needed for C-strand fill-in synthesis. In cancer cells that lack CTC1, STN1 or TEN1, telomerase is able to extend the telomeric G-strand. However, fill-in synthesis of the complementary C-strand is delayed or absent so the telomeres retain elongated 3’ overhangs. Interestingly, in cells that completely lack CTC1, DNA pol α is still able to associate with the telomere in late S/G2 of the cell cycle, the time that C-strand fill-in occurs. This finding indicates that CST is not needed to recruit DNA pol α but it may instead help pol α engage with the G-overhang to initiate C-strand synthesis.

In addition to demonstrating a role for CST in C-strand fill-in we made the unexpected discovery that the complex is also needed earlier in telomere replication for efficient replication of the telomere duplex region. In cells with low levels of CST the telomere duplex DNA is replicated more slowly, while in cells that completely lack CST subunits large sections of the telomere are periodically deleted. This sudden telomere loss is caused by replication fork stalling during passage of the fork through the G-rich telomeric repeats. Some of the damaged telomeres are re-extended by telomerase but eventually so much damage accumulates that the telomeres eventually undergo end-to-end fusion and after about three weeks the cells die. In cells that have reduced telomerase activity, damaged telomeres cannot be re-extended so the telomere fusions occur much more rapidly and the cells die within a few days. Our ongoing studies are designed delve more deeply into the mechanism of CST action both during telomere duplex replication and subsequent C-strand fill-in.  During telomere duplex replication, we wish to understand how CST rescues forks that stall in the telomeric tract. We also wish to determine if CST always functions by enhancing pol α activity or if it can also promote the action of other replication/repair activities. During G-overhang processing and C-strand fill-in, we wish to understand how CST participates in switch from telomerase-mediated extension of telomeric G-strand to C-strand fill-in synthesis by DNA pol α. Non-telomeric roles of CST. Our next unexpected discovery was that CST helps resolve genome-wide replication stress after cells are treated with hydroxyurea (HU) to induce replication fork stalling. STN1-depleted cells exhibit less efficient restart of DNA synthesis after HU removal and a concomitant decrease in firing of late or dormant replication origins. Conversely, CST overexpression enhances recovery from HU and increases new origin firing.  CST abundance also influences cell viability after treatment with HU, aphidicolin, MMS and camptothecin. Viability is increased by elevated CST and decreased by STN1 depletion, indicating that endogenous CST levels are limiting. However, CST abundance does not affect viability after treatment with the cross-linking agent mitomycin C. Thus, CST facilitates recovery from many, but not all, forms of exogenous DNA damage. Overall our results suggest that CST is needed in stoichiometric amounts to facilitate re-initiation of DNA replication at repaired forks and/or dormant origins. A major focus of the lab is to understand how CST functions at non-telomeric locations in response to endogenous and exogenous. The anaphase bridges observed after CTC1 gene-disruption appear to be unresolved replication intermediates. We examining how they arise, how they are resolved and the types of chromosomal sequence or structures that cause the replication stress that give rise to these structures. We are also exploring whether resolution of replication stress is always through new origin firing or if CST also facilitates fork-restart after certain types of replication stress or DNA damage. 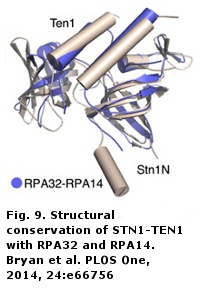 Structure/function relationships. CST shares a number of architectural features with Replication Protein A, the primary eukaryotic ssDNA binding proteins. RPA is essential for DNA replication, recombination and repair. It is a three subunit complex that functions by coating ssDNA and mediating protein exchange reactions. Yeast and human CST resemble RPA in that they harbor multiple OB-fold motifs which are used to bind ssDNA. The STN1-TEN1 dimers share striking structural similarity to the RPA14-RPA32 dimer in both the OB-fold domains and the dimerization interface. Cdc13 and RPA70 also share architectural similarity as both proteins harbor four OB folds. However the actual structure and function of these domains is not conserved. RPA70 uses three OB-folds to bind ssDNA and the protein does not form dimers. In contrast, ScCdc13 needs only one OB-fold for high affinity binding and the protein dimerizes through the N-terminal OB fold to form a DNA pol α binding surface. In mammalian cells, Cdc13 is replaced by CTC1 but the two proteins share little sequence identity and the extent of structural or functional conservation is unknown. Protein threading (Phyre) predicts 5 OB folds in human CTC1 two of which are subject to mutation in Coats plus or DKC patients resulting in decreased DNA binding. Mutation of the STN1-OB fold also decreases DNA binding suggesting that, like RPA, human CST may bind DNA via multiple OB folds. Our current model is that CST mediates protein exchange reactions in a manner akin to RPA. Dynamic binding of individual OB folds to ssDNA may allow CST to engage or disengage pol α and possibly telomerase and other proteins from the DNA.  Our ongoing studies seek to test this model both through in vitro DNA binding studies and through in vivo analysis of CTC1 and STN1 OB-fold mutants.