Strokes attack the brain. His brain is attacking strokes.

Joseph Broderick, MD, Professor and Director of the UC Gardner Neuroscience Institute and Director of the NIH StrokeNet, is an international leader in stroke research and treatment. Throughout his career, Broderick’s research has drastically impacted how strokes are treated, improving survival rates and patient living conditions after a stroke.

As the director of the National Coordinating Center for StrokeNet that runs NIH-funded stroke trials, Broderick is a principal investigator on studies that occur across the country. He’s been part of StrokeNet since its inception in 2013 and has worked on research for acute treatment, prevention of another stroke and recovery after a stroke. 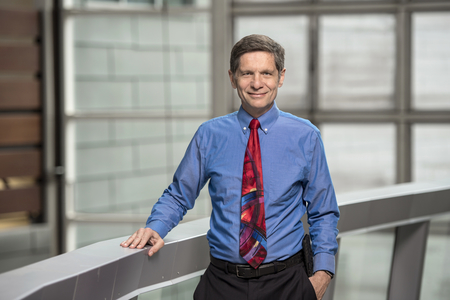 research has focused on ischemic strokes, strokes that occur due to a blocked artery. He was part of the team to first study tPA, a protein to help break up blood clots, for stroke treatment, which was later approved by the FDA. Originally, doctors only administered tPA within 90 minutes of a stroke, but with further research that period has since been extended to 4.5 hours and even longer with special brain imaging.

Broderick has also helped test procedures to remove larger blood clots. Most recently, Broderick and his team published results of a study through StrokeNet using imaging to determine if removing a blood clot would help recovery up to 16 hours after a stroke. They found that for patients whose brains had large areas of the brain that had not yet died, removing the blood clot made a big difference.

As a professor at UC College of Medicine, Broderick’s research is often inspired by his time in the classroom.

“What's terrific about being in an academic institution is that to teach, you really have to understand your material. When you teach, and you have students who ask questions, it makes you keep asking questions all the time. I learn things every day,” said Broderick. “I think, ‘How can we do this better?’ To me, that’s the highlight of academic medicine. It's not just ‘What is the standard? What do we do now?’ But ‘How do we do it better, and how do we teach other people to do it better?’”

Moving forward, Broderick continues to focus on intracerebral hemorrhages—strokes due to the rupture of an artery. His team has been working on a potential treatment to stop the bleeding, and they’re hoping to receive a grant to continue the research.

“If we can get the first treatment for intracerebral hemorrhage before I finish my career that would be great.”