Improving health care is in his blood.

Jose Cancelas, MD, PhD, Director of Hoxworth Blood Center, University of Cincinnati, is changing the world one blood cell at a time. As the director of the nation’s second oldest and only university-owned and operated blood center, Cancelas is a leader in blood and cell research, technology and products.

As only the fifth director in the blood center’s 80-year history, Cancelas feels as if he is standing on the shoulders of giants. Not long into his role as director, his extensive research efforts are already following the groundbreaking path of his predecessors. 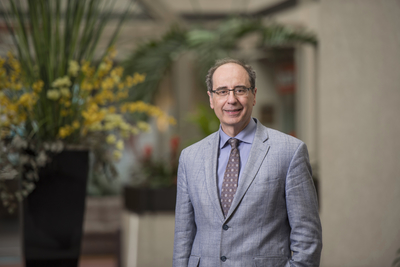 build on top of what has already been built by previous directors,” said Cancelas. “In the areas of hematopoietic stem cells, platelet preservation technology, and lyophilization of plasma, we can provide expertise at different levels—more basic research, preclinical and clinical—that really complements the knowledge out there worldwide and creates new products for patient care.”

Cancelas and his team have recently experienced two significant research breakthroughs with implications for blood centers and patients around the world. One of those research endeavors concerns refrigerating blood platelets. Previously, platelets couldn’t be refrigerated and had a short shelf life of just five days. But Cancelas and his team discovered a molecule that, when added to the platelets, allows platelets to be refrigerated without damage, increasing the shelf life to 14 days. Now, they’re moving forward to commercialize the technology and hope to be able to use it in patients in a few years.

Cancelas is also working on plasma technology that allows plasma to be frozen, made into powder and reconstituted with water. The technology has important implications for soldiers on battlefields because it allows plasma infusions to be prepared much more quickly than the traditional method of freezing, thawing and then infusing plasma. Cancelas is finishing a safety trial with the Department of Defense using the technology and expects to move forward on an accelerated path to biological licensing with the Food and Drug Administration over the next year.

“It's very important that the blood, blood products, and cell therapy products that we generate are safe and potent to be able to help patient's care.”

Cancelas’ current research endeavors, and those of others in the Blood Center, have the potential to impact patients worldwide as well as those in the Greater Cincinnati area.

“Because we are an academic medical center, because we are the only one owned and operated by a university, our interest is to try to use research and education to move the field forward,” said Cancelas. “We believe in investing resources to create new technologies and safer, more potent products.