His encore performance is our next best act.

Andrew Filak Jr., MD, became the interim senior vice president for health affairs and dean of the College of Medicine on Aug. 2, 2018. He previously served as senior associate dean for academic affairs, founding chair of the Department of Medical Education and professor of medical education and family and community medicine at the UC College of Medicine. He also served as vice president for education for UC Health. 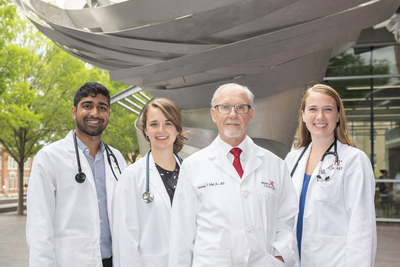 College of Medicine’s nearly 200-year history. He also is the sixth person – and the first since 1874 – to serve multiple terms as dean of the college as he was interim dean and vice president for health affairs from Aug. 6, 2010 until June 30, 2011.

A national leader in medical education, Dr. Filak led all educational activities at the College of Medicine from 1991 until 2018. He also has served as the Designated Institutional Official for graduate medical education for UC Medical Center and the College of Medicine for more than 30 years and as director of the UC Area Health Education Center program and director of the Family Medicine Residency Training Program.

Under Dr. Filak’s leadership, the College of Medicine revised and implemented an innovative four-year integrative curriculum, which began with the entering class of 2011. With these changes, medical students began receiving hands-on clinical training in a longitudinal primary care course in their first year coupled with early training in in the basics of medical history taking and physical exam skills. Students also receive training as first responders to provide a context for their medical education.

Raised in Jersey City, New Jersey, Dr. Filak attended Saint Peters College. He received his medical degree from George Washington University School of Medicine and Health Sciences in Washington, D.C. He came to the UC College of Medicine in 1978 for his family medicine residency and served as Chief Resident in that program. He joined the UC faculty in 1981.

Dr. Filak has received numerous awards during his career, most recently receiving the UC College of Medicine’s highest honor, the Daniel Drake Medal, in May 2018. Other honors include the John. C. Leonard Award from the Association for Hospital Medical Education (2016), University of Cincinnati Award for Excellence (2012), the Parker J. Palmer Courage to Lead Award from the Accreditation Council for Graduate Medical Education (2009) and Educator of the Year from the Ohio Academy of Family Physicians (2003). He also has served in leadership roles of prominent medical education organizations, including the Association for Hospital Medical Education, the Education Commission for Foreign Medical Graduates, Accreditation Council for Graduate Medical Education, American Association of Medical Colleges, the Ohio Academy of Family Physician, the Southwest Society of Family Physicians and the National Board of Medical Examiners.

For more on Andrew Filak, MD, visit the UC College of Medicine website.