He’s thinking that Parkinson’s isn’t what we think it is.

Researchers have spent decades trying to find a cure for Parkinson’s disease without any luck. Alberto Espay, MD, MSc, Professor of Neurology at the UC College of Medicine and Director and Endowed Chair of the James J. and Joan A. Gardner Family Center for Parkinson's Disease and Movement Disorders, is trying to move the needle in Parkinson’s research by redefining how the scientific community thinks about the disease. Espay wants to approach Parkinson’s, and other neurodegenerative diseases, like oncologists treat cancer—not as a single disease, but as many individual molecular diseases.

“By far the most innovative work 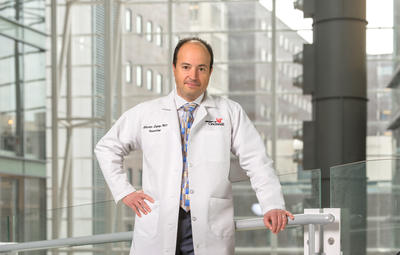 we're doing is also the riskiest—questioning the very definitions of neurodegenerative diseases created over many decades,” said Espay. “Our major contribution to the fabric of research is to understand the molecular subtypes of Parkinson's disease and to recognize each as separate diseases. Then, and only then, will we have our first success in disease modification, even if the treatment is initially applicable to fewer than five percent of those we call Parkinson's. But for that subgroup of Parkinson's disease, such a treatment will be a cure.”

This new approach to Parkinson’s is one of two major lines of research at the Gardner Center. While curing one type of Parkinson’s at a time remains aspirational, improving the symptoms of Parkinson’s patients today has been proven practical and rewarding. In that area, Espay and his colleagues have invested in research strategies that enhanced the quality of life for Parkinson’s patients. For instance, the Gardner Center tested the first patient in the nation as part of a clinical trial for a Levodopa pump developed for Parkinson’s treatment, which received FDA approval in 2015. The center has also evaluated treatments to improve selected problems in Parkinson’s disease, such as gait impairment (freezing of gait) and blood pressure changes (orthostatic hypotension) and has an active portfolio of research that encompasses over 20 clinical studies.

“We know that the individuals who come under our care a few years from now will be even better served than those we see today—partly because of the tight clinical and research connection that we have with our own patients, and also because of our large network of collaborations across the country and beyond,” said Espay. “We think that our patients today are better off because of what we've done in the past, and those who will follow in their footsteps will be even better thanks to their involvement in the multiplicity of research endeavors in which they participate.”

The center’s research is critical for today’s patients and those diagnosed in the future. However, Espay recognizes that therapeutic advances require the work of a collective community.

“There is nothing that I, individually, or our center alone, can do that may be meaningful enough to change things at an important level for patients. We are part of a village within ourselves, with our patients, with our caregivers, with our colleagues in other centers, and with the Cincinnati community, which has been very supportive of Parkinson's research. Without the collective investment to date, we wouldn't be where we are. We wouldn't see the future as bright as we see it.”