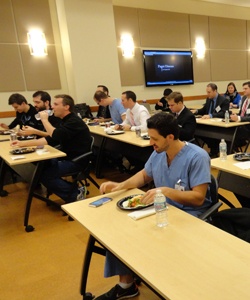 If a suspicious area is identified during a clinical breast exam (CBE), mammogram or other type of imaging, a biopsy may be recommended. Breast cancers can only be confirmed by biopsy.

Most biopsies are performed using local anesthesia (numbing medicine) to reduce discomfort, in an outpatient setting. During a breast biopsy a small tissue sample is removed from the breast and sent to the pathologist in order to make a diagnosis.

Different types of biopsies include:

During a fine needle aspiration (FNA), a very fine hollow needle is inserted into the breast, usually with ultrasound guidance, to extract fluid and small amounts of tissue.

A stereotactic biopsy is often used to sample calcifications or masses in the breasts that are too small to be felt during a clinical breast exam. The needle used during stereotactic breast biopsy is slightly larger than that used during an FNA. Once the patient is positioned upon the biopsy table, mammogram images are obtained and a computer program helps locate the abnormality. A small skin nick is made and generally 3-5 samples are removed. Pressure is placed on the breast to limit bleeding and a small bandage is applied.

An abnormality found during an MRI scan me be recommended to undergo an MRI-guided breast biopsy, particularly if the abnormality is not seen on other imaging modalities. Using the MRI machine to locate the abnormality, a small skin nick is made and the handheld biopsy device is inserted into the breast. Multiple cores are suctioned through the device. Pressure is applied to stop the bleeding and a bandage is applied.

Needle localization may be used to help guide a surgeon during a surgical biopsy. Using imaging to locate the abnormal area, a small hollow needle is inserted into the breast. A thin wire is then threaded through the hollow needle and held in place with a small hook at the end. The patient is then taken to surgery. The surgeon uses the wire to locate and remove the identified abnormality.

It is important that prior to any biopsy or surgical procedure that any medications that will thin your blood be discontinued. Bruising, pain and a small amount of oozing may result from the biopsy. If this should become excessive, contact your doctor.