The Relationship between Vortices, Acoustics, and Vibration in Vocal Fold Asymmetry 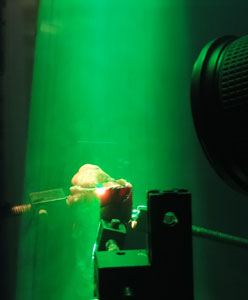 Unilateral vocal fold paralysis (UVFP) can present with structural asymmetries in left-right position of the membranous folds, vocal fold height, length, tension, and arytenoid position. Surgically, there is often controversy on how to restore optimal vocal function. Work in our previous R01 showed that vortices form in the superior aspect of the divergent glottis during closing, and that these vortices are associated with changes in the flow rate such as greater flow skewing (previously thought to be only caused by increased vocal tract inertance), and with favorable effects on loudness and intelligibility. Thus, we hypothesize a better understanding of these vortices, and their effect on flow rate and acoustics, will open a new paradigm to evaluate and design new surgical interventions for unilateral paralysis and other conditions featuring structural asymmetries. So far, our findings are based on two-dimensional (2D) measurements whereas intraglottal geometry and flow rate change in all three-dimensions (3D). The extension of our technique from 2D to 3D will allow completion of the following specific aims:
Specific Aim 1. Using a combination of computational and excised canine larynx models, characterize the effects of vocal tract inertance, intraglottal vortices and tissue elasticity on the medial surface dynamics of the folds, volumetric flow rate at the glottal exit, and acoustics in the following models: 1A. Excised canine larynx with relative symmetry in vocal fold length, height, and stiffness. 1B. Excised canine larynx with asymmetries in vocal fold length, height, and stiffness. 1C. Excised canine larynges that have a Thyroplasty Type I with various implant shapes and degrees of infraglottal medialization. 1D. Excised canine larynges that have Thyroplasty Type I with and without arytenoid adduction.
Specific Aim 2. Volumetric flow rate will be measured directly at the glottal exit using volumetric particle imaging velocimetry and indirectly at the mouth using inverse filtering in an excised canine larynx model with a mechanical vocal tract. 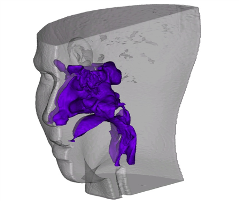 The goal of this K25 Mentored Quantitative Research Career Development Award is to enable the candidate to develop expertise in the areas of acoustics and aeroacoustics of speech, in the context of a research plan that investigates sound source mechanisms that affect speech disorders due to velopharyngeal insufficiency (VPI). The professional development plan involves a structured curriculum of coursework, workshops, seminars, and individual study under the supervision of a mentorship and advisory team. The mentorship committee includes multidisciplinary team of established researchers with expertise in acoustic modeling of speech and speech disorders, aerodynamics of speech, aeroacoustics, medical imaging techniques, and clinical management of VPI. The research plan involves specific aims that have been designed to address the gap in knowledge for the lack of correlation between the size of the velopharyngeal opening with VPI and the severity of speech distortion.
The research will be guided by two hypotheses: 1) sound characteristics due to airflow will decrease as the size of the velopharyngeal opening is increased; 2) sound characteristics due to resonance will increase as the size of the velopharyngeal opening is increased. The training and research experience provided by this award will enable the candidate to successfully bear as an independent researcher in the clinical areas of VPI and craniofacial anomalies.

The purpose of this grant is to develop an application of vortex airflow for the management of obstructive sleep apnea therapy.

The purpose of this grant is to simulate the flow through various types of tracheostomy tubes as they are placed in the trachea of an adult patient.

The main goal of this project is to create a diagnostic tool that will better predict the need and effectiveness of specific surgical procedures in the treatment of obstructive sleep apnea (OSA) in children with Down syndrome.