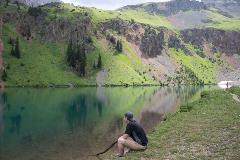 Son: Cayden (1 year)
Hobbies:
Running, hiking and mountain biking
Places He's Lived:
Orem, UT, Pittsburgh, PA, Albuquerque, NM, Provo, UT, Samara, Russia, Annapolis, MD, Provo, UT, San Jose, CA, and now Cincinnati, OH
What He Knew About Cincinnati Before Matching:
You guys got some weirdo chili-thing that everyone likes to talk about.
Jobs he's held before this:
Best Buy home theater sales consultant and door-to-door pest control sales
His analysis of his door-to-door pest control sales skills:
I was medium good at it. I wasn't amazing. But, I was able to sell enough that I made a good amount of money doing it. 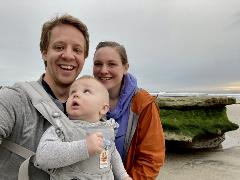 What made him want to go into neurosurgery:
Growing up, I always planned to follow in my father's footsteps and go into engineering. However, after doing an engineering internship, I realized I didn't really like the day-to-day work. But, as part of that internship, I attended a lecture on evolutionary biology of the brain which was basically a lecture on the psychology of why humans behave the way they do. It was really interesting to me. At that point, I knew I needed to change my major to neuroscience.
Before medical school, I worked as an emergency room scribe and was able to see all kinds of procedures. I really enjoyed the aspect of being able to have somebody come in and then you can fix the problem that they have. The procedural aspect of it was really appealing. Between those two things: having an interest in neuroscience and then being inclined towards procedures, neurosurgery made a lot of sense. Scrubbing in on surgeries during medical school and just absolutely loving it really confirmed this is definitely what I want to do.
What made him want to match at UC:
I really liked Dr. Cheng and the interview I had with him. I really like his philosophy on teaching: understanding mechanisms of disease and why we do the things we do, as opposed to just doing them because that's what you learned. The idea of really being able to think through problems, as opposed to being a surgical technician really appealed to me a lot.
I was also impressed by the different outreaches you do. Dr. Forbes told me about how you have a connection with Ukraine. That really appealed to me because I did my mission experience through BYU in Russia.
There were many things that impressed me, but those were two of the major things that really stood out to me.
Any sub-specialty interest yet?
The two I have had the most exposure to are skull base and vascular. I've really enjoyed being able to scrub in on a lot of those types of cases. But, I think I would be interested in spine, also in functional. I just haven't really been exposed to a lot of those cases yet.  I'm pretty open at this point. 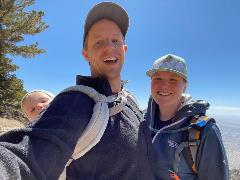