Dr. Juan Torres-Reveron always assumed he would follow in his father’s footsteps and become an engineer. Once he considered medicine though, it was his dad, an electrical engineer, who persuaded him to pursue that dream instead. Dr. Torres-Reveron remembers his father telling him, “He said, ‘What I do is very important, but, at the end of the day, I go home and people have power. That’s it. You’re going to be able to look a mom in the eyes, and say, 'Your son is better because of what I did.'" He took his father’s advice and received not just a medical degree from Baylor College of Medicine, but also a PhD in neurobiology from University of Alabama. 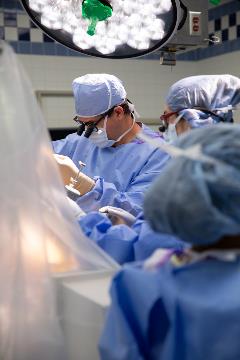 “In some weird way, I kind of ended up in electrical engineering, just dealing with electricity of the brain,” Dr. Torres-Reveron says. He completed his residency and fellowship at Yale’s New Haven Hospital making him Cincinnati’s only fellowship-trained epilepsy neurosurgeon. “Functional and epilepsy neurosurgery deals with when the brain goes bad,” Dr. Torres-Reveron explains. “For example, Parkinson’s Disease, essential tremors, epilepsy: things where you get an MRI and the brain looks fine. We try to change how the brain works, or try to stop it from misbehaving. It’s a very specialized area." Ninety-nine percent of the surgeries Dr. Torres-Reveron performs are functional and epilepsy surgeries allowing him the opportunity to specialize and excel in these types of cases.

Dr. Torres-Reveron credits the team he works with at the Epilepsy Center for the exceptional care patients receive. “We have a team of people working together to figure out a solution," says Dr. Torres-Reveron. Every patient receives treatment from a team that includes neurology, neurosurgery, neuropsychology, social workers, nurse navigators, even specialized radiologists. “Some of our epilepsy MRIs would be considered normal by most radiologists. They look normal enough at first glance, but there are fine things that we are looking for," explains Dr. Torres-Reveron. "That level of specialty, you are not going to find anywhere else.” Dr. Torres-Reveron says that comprehensive level of care guarantees the team will find a solution for patients with movement disorders. “We always have something for you, something that you probably haven’t tried; it’s just a matter of what,” says Dr. Torres-Reveron. He proudly goes on to say, “You can only find that at very select centers in the country.”

In addition to his clinical and surgical work, Dr. Torres-Reveron also enjoys teaching the medical students and residents of University of Cincinnati. He says, “it's nice to see their progression,” as they improve through the years. He even jokes that he is the only attending who can put a price tag on how much he enjoys the educational part of his job (as he gladly took a pay cut to transfer into academic medicine). He says he would encourage all medical students interested in neurosurgery to do their residency with the University of Cincinnati. “They get the whole gamut of experience," he says. "The residents that come here leave with an education that is unparalleled.”
Intranet Login