With the last name of Panganiban, it's no wonder everyone at UC Health 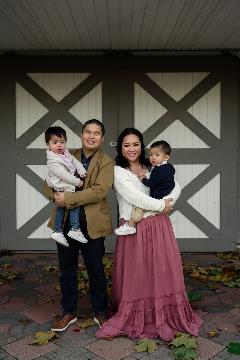 calls Cesar Panganiban, Jr. FNP-C by his nickname: "JR." JR laughs while saying, "I don't pronounce it to a lot of people, but it's Panganiban (paan-ə-GEE-bon)." Even at his graduation from nursing school, the Dean tried to confirm the correct pronunciation of JR's last name minutes before he walked across the stage, but he told her not to bother.


That nursing school graduation may not have happened, had it not been for JR's competitive little sister. When JR did not seem too interested in his sister's idea of getting their NP degrees together, she jokingly taunted him and said, "That's cool, when I eventually become your boss." That was all the incentive he needed to enroll in school to get his nursing practitioner certification with his sister.

JR had planned to go into family practice, but that same sister took an RN job with neurology, and let JR know about an open position at her hospital with neurocritical care. "It sounded more exciting than family practice, so I jumped ship and did inpatient neurocritical care for 2 years," says JR.
While exciting, he quickly burned out of the hectic work and long hours and jumped at the chance to take a hybrid inpatient/outpatient job working with functional neurosurgeon, Juan Torres-Reveron, MD, PhD. "I wasn't really looking specifically at neurosurgery, but I ended up loving it," recalls JR. So, when Dr. Torres-Reveron decided to take a job as an Assistant Professor of Clinical Neurosurgery with the University of Cincinnati College of Medicine, JR decided to come with him.
Four years into the job, JR says he's still in love with his job, and that it continues to take him out of his comfort zone. "The complexity of the cases really makes you think outside the box and look at it from different angles," JR says.
As an APP or advanced practice provider, JR appreciates that he is able to spend as much time with a patient that is needed. "We are able to explain things at a level that the patient understands," he says. JR says patients often tell him that no one has listened to them speak for as long as he has.
While he enjoys working with patients, he also has an interest in working behind the scenes. In addition to a bachelor's degree in political science (JR's parents wanted him to become a lawyer and take over the family business in the Phillipines), a BSN and an MSN, JR is now currently enrolled in an MBA program hoping to better understand the business aspect of healthcare. JR envisions, "Ten years from now, I'm hoping I can apply what I know as a provider along with the background of having my MBA into a practice and be able to help run it more efficiently."
In the meantime, whenever JR has any questions or needs advice, he can turn, once again to his sister, who followed him to UC to work as an NP in neurology. He says, "She's always a good side consult for me when I have questions, and she does the same with me when she has questions in neurosurgery."