Oct 9, 2017, 16:00 PM by Paul Eichert
This year the ERC gave out special awards at the Pilot Research Project (PRP) Symposium to celebrate 40 years and recognize significant impacts on health, safety, and well-being outcomes among workers.

This year the ERC gave out special awards at the Pilot Research Project (PRP) Symposium to celebrate 40 years and recognize significant impacts on health, safety, and well-being outcomes among workers. The UC ERC Academic Cores honored professionals who have had an exceptional impact on worker health and safety in the areas of Mechanical Engineering, Industrial Hygiene, Occupational Health Nursing, Research to Practice, Service, Continuing Education, and Overall Impact. Please see the following award winner bios and photos from their award acceptance at the symposium.

Dr. Bingham is an internationally known toxicologist and former head of the Occupational Health and Safety Administration (OSHA). She began working with the UC Department of Environmental Health (DEH) on immunology studies then progressed as a biologist focusing on complex mixtures and cancer among workers exposed to chemicals on the job. Eventually, Dr. Bingham took over the carcinogenesis group at DEH and built a relationship with NCI and NIEHS. In the early 1970s she collaborated with NIOSH and served on OSHA’s carcinogen advisory committee and the Labor Department’s commission on coke oven emissions. Dr. Bingham began focusing on worker training for safety and health in the workplace. In 1977 she became OSHA’s Assistant Secretary of Labor during President Jimmy Carter’s Administration, the first to serve a full four year term. During this time, her main priorities were 1) an all-out effort to combat occupational illness and disease, 2) to “make life safer for employees, not to make life harder for employers” by increasing assistance to small businesses, and 3) to simplify safety rules. During her time at OSHA, Dr. Bingham instituted the New Directions Health and Safety Training program, used millions of dollars to educate workers, distributed funds to unions and university training efforts, and helped build strong programs. In 1982 she became the Vice President of Research and Graduate Studies at UC and returned to her research and won an agreement with the EPA and another with NIOSH, funding the Center to Protect Workers’ Rights. 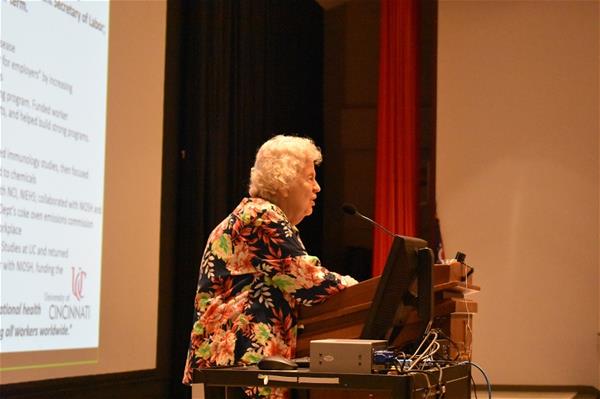 For 35 years, Dr. Lockey has been involved with occupational studies and adverse pulmonary health of workers in a variety of industries. Over the last 30 years he has been the PI of the longest on-going occupational pulmonary morbidity and mortality study within the US that studies the longitudinal exposure of workers to refractory ceramic fibers (RCF). These study results have informed RCF occupational exposure guidelines both within the US and Europe (REACH) demonstrating global influence. In collaboration with the Mechanical, Industrial and Nuclear Engineering Department he was instrumental in the development of technology for a personal ultra fine particle sensor (<1.0 micron) that represents a paradigm shift from any previous monitoring device that is currently being used by the USAF, UC, and CCHMC investigators among others. A patent was issued for this technology and licensed by UC to Environmental Monitoring Technology of which he is the CEO. He and his collaborators have done research on firefighters that has had far reaching influence in the US and globally to establish compensation due to exposures to multiple carcinogens. He is currently a member of the National Academy of Sciences National Research Council's committee on Toxicology. 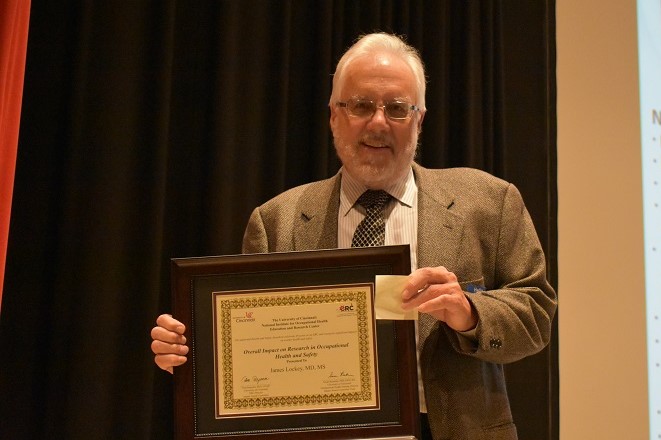 During her time as Continuing Education Director for the UC ERC, Dr. Jarrell interacted extensively with local, state, and federal regulating agencies as the CE courses were driven by regulation. Dr. Jarrell often presented at national levels and organized special activities for the ERC such as a trip to the International Conference on Biomechanics and Ergonomics in Cairo, Egypt and an International Conference on Nanotechnology hosted in Cincinnati. Working with the University of Minnesota, Dr. Jarrell assisted in the formation of the Great Lakes OSHA Regional Education Center. This Center underwent a competitive renewal in 2002-03 and was awarded a five-year renewal in a new configuration which included the University of Cincinnati as the lead center, the Eastern Michigan University, and the United Auto Workers. Dr. Jarrell took over as the Executive Director of the Great Lakes Regional OTI Education Center at that time. She continues to serve the UC ERC as Evaluations Director. 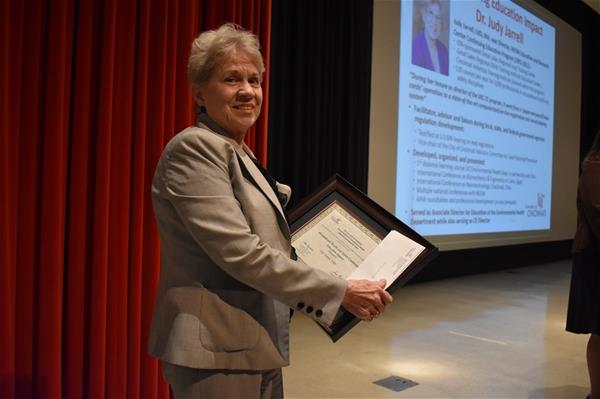 Dr. Hutton began working as a nurse where he first became interested in addressing the problem of workplace violence (WV). He studied in Occupational Health Nursing and upon graduation, began work at the Cincinnati Veterans Health Administration (VHA) Hospital where he translated research into practice. Dr. Hutton developed a three-pronged research-based WV practice model of training, threat mitigation, and reporting. The model is unique for its comprehensive nature, including education, multidisciplinary threat assessment teams, mitigation plans, and facilitative reporting structures of disruptive behaviors. Systems improvement techniques and informatics technology/methodology were used to address reporting barriers and standardize reporting. Through his unwavering leadership, the model was successfully implemented at the Cincinnati VHA. Outcomes were unquestionably favorable, showing substantial decreases in WV incidents (51%), injuries (32%), and severity (29%), as well as higher nursing staff satisfaction. Following success within the Ohio VHA network, a grass roots effort emerged among VHAs nationwide to build on, customize, and implement the model. In 2016, as part of a nationwide multidisciplinary implementation effort, Dr. Hutton was appointed as WV Prevention Program Clinical Manager, the highest-ranking WV prevention nurse within the VHA. His leadership of national level multiple disciplinary teams resulted in system-wide improvements. The model has been deployed to 142 hospital settings and all the associated satellite clinics.

John Morawetz has a distinguished record of service in occupational health. Much of his impact has been in ensuring that workers have the requisite knowledge and skills to identify and avoid workplace risks. This impact is highlighted via his leadership in worker training. John works as Director of the ICWUC Training Center which trains 7,000 participants each year from industrial unions and organizations in Industrial, Hospital and School Chemical Emergency Response, Hazardous Waste, and Disaster Preparedness. John has also provided service to the UC ERC graduate and continuing education programs as an advisory board member and hosting EIH students for hazardous waste worker training events. John has made a national impact in helping derive protective chemical standards. He served on the NAS panel to review acute emergency guideline levels and also has been a contributor and commenter on other emergency value derivation efforts – such as the NIOSH IDLH program.  These types of activities provide national standards of practice to inform decisions during chemical emergency response. Thus, the impacts of this effort are direct and take effect during chemical emergencies that can affect communities on a large scale. 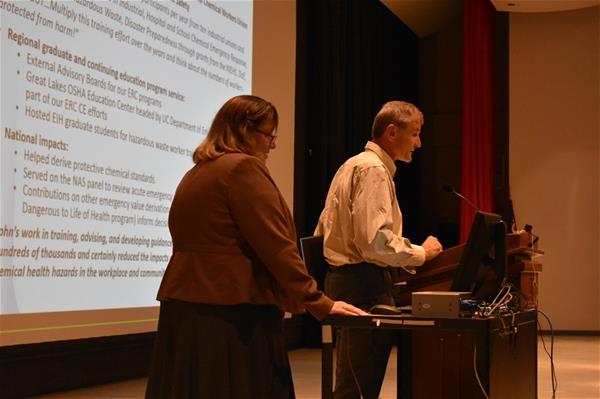 Dr. McKernan has made significant impacts in industrial hygiene practice that go far beyond the Cincinnati region. Lauralynn has been instrumental in moving the science forward for ensuring that industrial hygiene professionals have health-based exposure benchmarks for chemical hazards in the workplace. She was the lead of a complex assessment effort for diacetyl. While developing guidance on this chemical is itself an important impact on thousands of workers, her efforts in this area also helped to set in motion preventive strategies for looking at food manufacturing risks in the broader sense. She was assigned to the leadership of the NIOSH Occupational Exposure Banding (OEB) team and guided the team through its formative period. This innovative effort is providing a tool for industrial hygienists to assess potential health-based exposure limit (OEL) ranges for the thousands of chemicals with no current guidance. Dr. McKernan is viewed as a go to resource on mentoring, management, and leadership. This shows in her career track and even more so in the number of people that seek her input. She has served as a leader, advisor, or mentor for national industrial hygiene associations, been instrumental in planning technical conferences, and mentored numerous young professionals and students. She has also supported the IH program at UC by presenting seminars, hosting students, and serving on advisory committees. 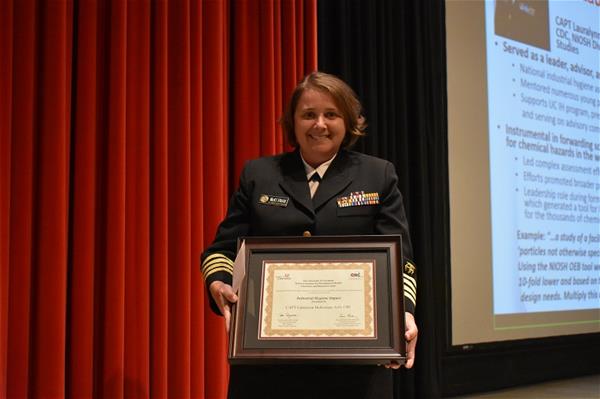 Mr. Park is a Vice President and Partner at Centric Consulting, a Business Consulting and Technology Solutions Firm with over 20 years of Consulting experience. Mr. Park co-leads Centric’s National Enterprise Applications and Solutions (“EAS”) Business, a practice focused on business transformation that leverages solutions such as Oracle Cloud and Microsoft Dynamics 365 among other ERP and CRM enterprise solutions. Mr. Park is also a serial entrepreneur and a philanthropist. He has launched several profitable businesses, and continues to feed his passion for start-ups and social enterprise through his leadership in Flywheel Social Enterprise Hub and Rathskeller Labs, a start-up MVP accelerator. He serves on Advisory Boards including the University of Cincinnati’s (ERC) National Advisory Committee, UC’s OSHE engineering program, UC’s OBAIS program at the Lindner College of Business, The Circuit, and a regional Smart City Initiative. Mr. Park has been a strong supporter of the ERC’s Occupational safety and Health Engineering program for over 20 years and has been the longest serving member of the External Advisory Board for the program for 15 years. 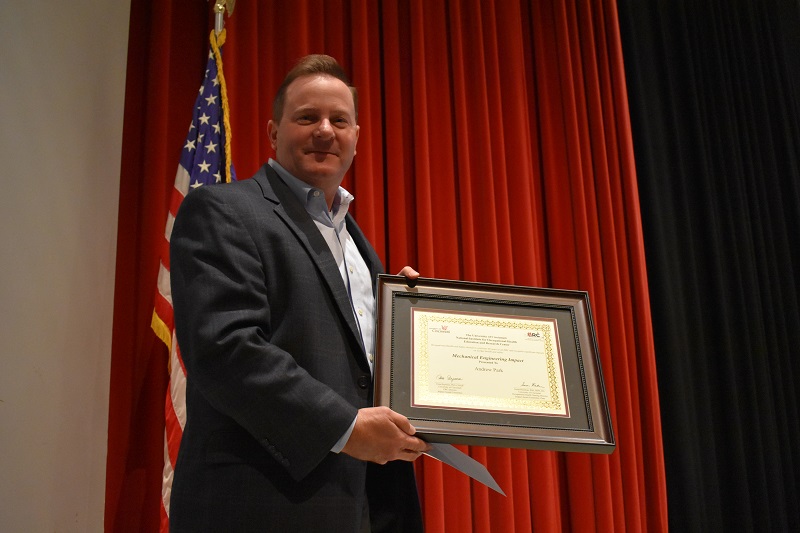