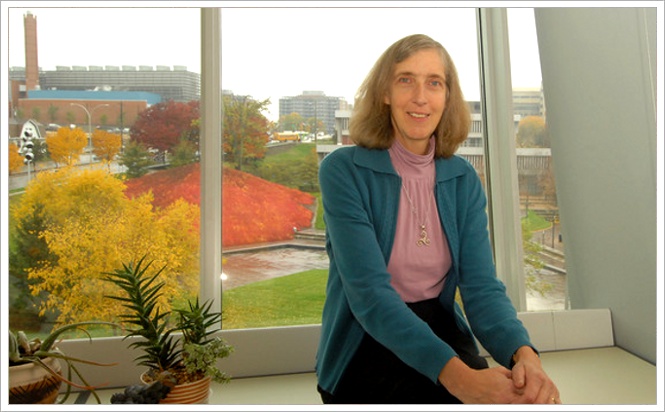 Our research focuses on the structure and function of telomeres, the DNA-protein complexes that cap the ends of chromosomes. Telomeres are composed of repeated sequence DNA and a series of specialized proteins that package the DNA terminus. New telomeric DNA is made by an enzyme called telomerase.

Telomeres play key roles both in cancer prevention and cancer development. Most human cells lack telomerase so our telomeres shorten each time they divide. This gradual shortening limits the number of times a cell can divide and so helps prevents tumor development. However, if cells acquire mutations that allow them to override the signals from short telomeres, continued cell division leads to telomere loss and end-to-end fusion of chromosomes. The fused chromosomes then break which leads to chromosome rearrangements and genomic instability. Eventually the genome-wide alterations lead telomerase up-regulation. This up-regulation is a critical step in cancer development because telomere elongation by telomerase allows cells to proliferate indefinitely and thus to become immortal.

We are using genetic and biochemical approaches to examine the function of proteins that form the protective telomeric DNA-protein cap and/or ensure that the telomeric DNA is fully replicated. Our goal is to understand how telomere proteins, telomerase and DNA damage response factors cooperate to ensure that telomeres are fully replicated and the protective protein cap reassembled at each cell cycle. This information is needed to understand how telomeres prevent genome instability and hence prevent the development of human cancers.

Our current focus is on a recently identified telomere/DNA replication repair complex, CST (CTC1/STN1/TEN1). Our results indicate that CST has a separate function from shelterin, the well characterized telomere protection complex. CST acts during several key steps in telomere replication both prior to and after telomerase action. We have also found that CST has unexpected genome-wide roles in recovery from replication stress. Thus far, we have shown that CST helps replication resume after replication fork stalling and the level of CST expression determines how well cells can tolerate various forms of DNA damage. We are now examining the mechanism for this replication rescue. Mutations in CST have cause the terminal neurological disorder Coats plus and some patients have symptoms of the short telomere syndrome dyskeratosis congenita. The severity of patients symptoms are likely to result from the combined telomeric and genome-wide effects of CST mutation. We using a human somatic cell knockout system to determine the mechanism by which the CST mutations cause disease.

We are looking for talented postdoctoral fellow to join us in our studies of the telomeric and genome-wide roles of CST. The position is funded by a T32 training grant from the National Cancer Institute and is open to US citizens or green card holders. Candidates should have a recent PhD and a strong background in biochemistry and/or molecular and cell biology.

The University of Cincinnati Medical School is part of a large medical center complex that provides an outstanding scientific environment and superior research facilities.

Cincinnati is a medium sized Midwestern city that offers a high standard of living with good access to both the arts and outdoor activities.